Watercolour of a Maori Warrior, December 1864. This unknown Maori Warrior is performing a Haka (war dance). This portrait was painted by Lieutenant Horatio Robley, who served with the 68th Light Infantry in New Zealand during the Second Maori War, 1864-1866. After the Battle of Te Ranga, the defeated Maori tribes began to surrender. Before the 68th Light Infantry sailed for home in March 1866, Horatio Robley spent as much time as he could with the Maoris living with them and sketching and studying their way of life, their art and especially their tattoos or Moko. Acc No: 2104. This watercolour was purchased in 1973 with the financial assistance of the Army Museums Ogilby Trust. 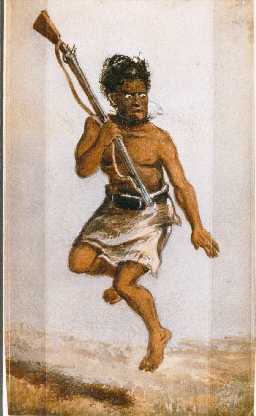