Print of 'The Battle of Vittoria, 21 June 1913'. This hand-coloured print by W Heath was published in London in 1836. Vittoria was one of the major battles of the Peninsular War. During the battle, the 68th Light Infantry captured and then looted the baggage train of Joseph Bonaparte. He was the Emperor Napoleon's brother and had been made King of Spain. Acc No: 2386 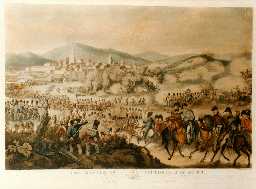