Miniature Portrait of James Leith, 68th Light Infantry, 1808-1814. James Urquhart Murray Leith was born in Scotland in 1785 and joined the 68th Regiment as an Ensign in 1804. Captain Leith fought with the 68th Light Infantry in the Peninsular War and was killed in action at the Battle of Oeyreguave on 23 February 1814. A Scottish newspaper gave an account of his death - The Brigade was ordered to drive the enemy from the village and entrenched camp and he, as usual the first man, had penetrated to the entrance of the town and had the satisfaction to see them give way, when he received the fatal shot, which entered his left breast and passed through his body, allowing him only time to say "Lead on, Stapleton, I am no more." For further reading, 'Faithful: The Story of The Durham Light Infantry' by S G P Ward (1962) has a detailed chapter on the 68th Light Infantry in the Peninsular War. Acc No: 656 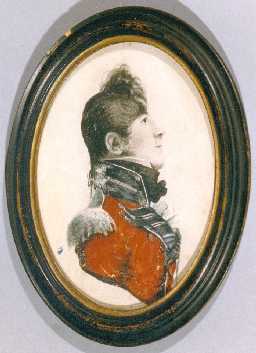