Officer's Full Dress Coatee, Durham Militia, 1853-1855. This scarlet woollen coatee (jacket) has white facings (collar and cuffs), 'slashed' cuffs, silver lace, silver epaulettes on both shoulders, and silver buttons with 'DM' below a crown. Note: In the mid-19th century, the Militia wore silver buttons and lace, whilst the Regular infantry wore gilt. This uniform and 1796 Infantry pattern sword belonged to Edward Nixon, who had been born in County Durham in 1787, and who was the Durham Militia's Surgeon from 1821 until he finally retired in 1866. During the Peninsular War, he had served with the Coldstream Guards as an Assistant Surgeon and was awarded the Military General Service Medal with the bars 'Salamanca' and 'Fuentes D'Onor'. Edward Nixon died at Barnard Castle in 1869, aged 82 years. For further reading on the Durham Militia - 'The Durham Light Infantry' by W L Vane (1914) and 'Faithful: The Story of The Durham Light Infantry' by S G P Ward (1962). Acc No: 677 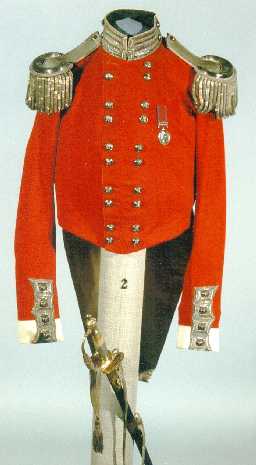