Officer's Service Dress Tunic, 1st Battalion DLI, 1901-1902. This khaki tunic (jacket) was worn by Second Lieutenant Hubert Coddington of the 1st Battalion DLI. He commanded the DLI half-company of the 23rd Mounted Infantry in South Africa from 1901-1902. The jacket, which is made from wool, has no rank badges, the buttons are leather covered and the only badge is a curved brass shoulder title. Over the left shoulder is a leather rifle cartridge belt, as worn by British Mounted Infantry. Hubert Coddington was wearing this jacket when he was wounded at Leeuw Kop on 2 August 1901. The nine holes in the jacket (all ringed and numbered) were made by one Boer bullet. The attached explanatory label was written by Hubert Coddington himself. Captain Coddington was killed in action serving with the 2nd Battalion DLI near Ypres in 1915. For further reading, 'Faithful: The Story of The Durham Light Infantry' by S G P Ward (1962) has a detailed chapter on the DLI during the Boer War. Acc No: 2293 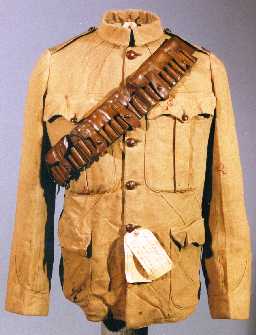