Osprey body armour vest as worn by Lt. Col. Nick Kitson, Commanding Officer of the 3 RIFLES Battle Group during Operation Herrick 11. The Osprey body armour system is used by the British Armed Forces to protect wearers against both bullets and the fragmentation caused by explosive devices. Modular in design, the system is based around a vest which covers the torso, protecting the vital organs. The vest consists of front and rear soft armour panels and ceramic trauma plates. In late-2010 the newest version 4 was issued to personnel serving in Afghanistan. 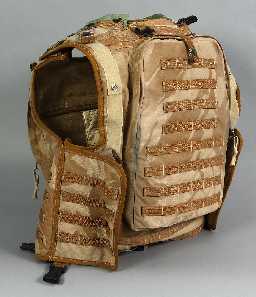