Mk 7 helmets were introduced by the British Army in 2008. Made from the same ballistic nylon material as the Mk 6A, the Mk7 is slightly lighter due to less coverage around the forehead. The Mk7 was introduced to offer the wearer better vision, especially when lying flat on the stomach, but the increased amount of exposed forehead made some soldiers uneasy. This example demonstrates the ability of the kevlar material to protect wearers from gunfire, the marks showing the effect of a bullet round striking the helmet. 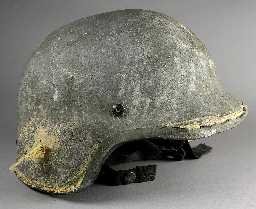