Bugle, 11th Durham Rifle Volunteers, 1861. This bugle was presented to the 11th Corps of the Durham Rifle Volunteers in January 1861 by Mrs P S Reid. It is made of Sheffield plate, though much of the silver plating has been worn away, and the bugle cords are light green. The 11th DRV was formed in Chester le Street in June 1860. The first commanding officer was Captain P S Reid. After amalgamations, this Chester le Street corps became a Company first in the 4th Volunteer Battalion DLI and then, after 1908, in the 8th Battalion DLI. Acc No: 591 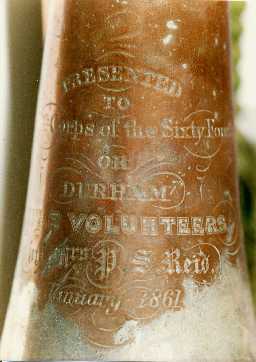 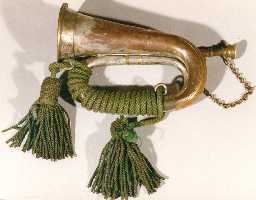