Officer's Grenadier Cap, Durham Militia, 1759-1761. This cap is made of brown fur with an embroidered plate (badge) on the front. The plate is made of silver wire with other coloured threads and has the letters 'DM' and the crest of the Earl of Darlington, who was Colonel of the Regiment. On the back of the cap is a green velvet bag with a silver net and tassel. The Grenadier Cap in the DLI Museum is extremely rare and it is the oldest known, surviving item of uniform worn by the Durham Militia. It belonged to Crosier Surtees of Redworth Hall near Newton Aycliffe. Born in 1739, he joined the Durham Militia when it was formed in 1759. Crosier Surtees retired in 1761 but not before he had his portrait painted. This painting, by an unknown aritist, shows Lieutenant Surtees in his Militia uniform. His Grenadier Cap, now rather dark, is at the bottom of the painting. Acc No: 1092 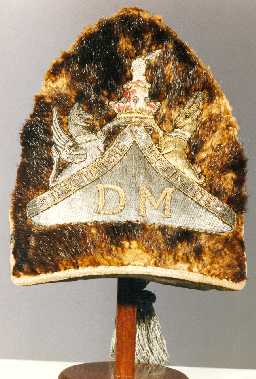