Officer's Fusilier Cap, 1st South Durham Fusiliers Militia, 1868-1881. This fur cap belonged to Major Robert Hugginson of Romaldkirk in Teesdale, who served in the Militia from 1867 to 1888. The silver badge is a 'flaming grenade'. The 1st South Durham Militia at Barnard Castle were converted in 1868, at their own request and expense, into The Durham Fusiliers and adopted a new uniform, including the fur fusilier cap. This was the only English Militia Regiment to be made into Fusiliers. Acc No: 1012 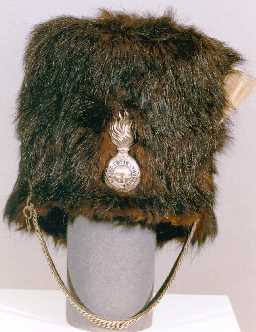