A set of Colours was presented to the 68th Light Infantry in 1857 in Portsmouth by the Duke of Cambridge, before the Regiment left for service in India and Burma. These Colours were also carried during the New Zealand campaign of 1864-66. In September 1888, these Colours were finally laid-up in Durham Cathedral after a new set had been presented. In 1981 all the DLI's Colours in the Cathedral were taken down and photographed. The Queen's Colour had almost rotted away but the Regimental Colour (shown here) had survived in better condition. This Regimental Colour, which was once dark green silk, has faded to a muddy brown. In the centre is 'DURHAM' in gold wire on a scarlet circle, with 'LXVIII' inside. There were originally nine battle honours in yellow silk scrolls. In 1870 the new battle honour 'New Zealand' was added. 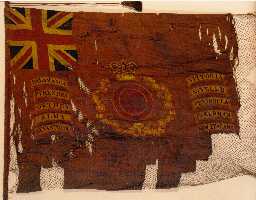