Tureen Cover, 2nd Bombay European Regiment, about 1840. This tureen (soup dish) cover is made of silver plate and bears the crest of the 2nd Bombay European Regiment. It was probably made for the Officers' Mess, when the Regiment was formed in India in 1839. This Regiment became the 2nd Battalion DLI in 1881. In 1924 an officer of 2 DLI bought this cover after he saw it being used in a railway station dining room in India. Acc No: 307 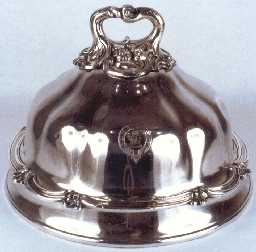