Cricket Match, 68th Light Infantry. This coloured print by P Carpentier shows a 68th Light Infantry team playing a cricket match in Calcutta on 15 January 1861 against the Calcutta Cricket Club. In 1857, after returning home from the Crimean War, the 68th Light Infantry was sent to India and then on to Burma. For five years, with little else to do, sport, along with hunting, amateur theatricals and gardening, became an essential part of Regimental life. This was the first 'overseas' cricket tour organised by the Regiment and the team contained both officers and soldiers. Acc No: 816 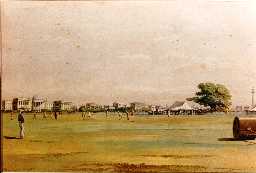