At Windsor in July 1909, King Edward VII presented Colours to the Territorial battalions of The Durham Light Infantry - 5th, 7th, 8th and 9th DLI. The 8th Battalion DLI carried their Colours until they were finally laid-up in Durham Cathedral in October 1964. In 1981 all the DLI's Colours in the Cathedral were taken down and photographed. This is the 8th Battalion DLI's King's Colour. Today it is still in good condition with a central badge of the Roman numeral 'VIII' in gold wire and the name of the Regiment around. In 1926 ten battle honours for the First World War were added in yellow scrolls. After the end of the Second World War a further ten honours were added. 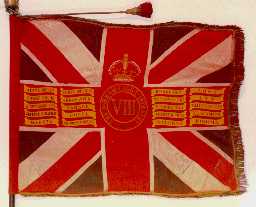