Officer's Full Dress Tunic, 1st South Durham Fusiliers Militia, 1869-1881. This scarlet jacket with white facings (collar and cuffs) was worn by Major Robert Hugginson of Romaldkirk in Teesdale, who served in the Militia from 1867 to 1889. The silver buttons bear a flaming grenade with 'The Durham Fusiliers'. The 1st South Durham Militia at Barnard Castle were converted in 1868, at their own request and expense, into The Durham Fusiliers and adopted a new uniform, including the fur fusilier cap. This was the only English Militia Regiment to be made into Fusiliers. Acc No: 1015/1-2 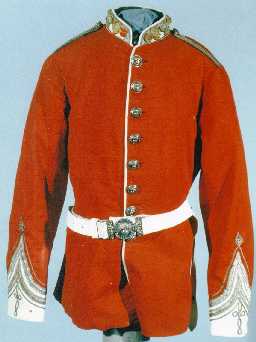