Cricket Blazer, 1st Battalion DLI, 1890s. This officer's cricket blazer is in the DLI's Regimental colours of dark green with narrow red stripes. The buttons are of the usual Regimental pattern with the Victorian crown. Sport, especially cricket, and later football and rugby, became a vital part of Regimental life in the British Army from the mid-nineteenth century. Cricket was played by the 68th Light Infantry not only in peace-time but also on campaign in the Crimea and New Zealand. Acc No: 222/2 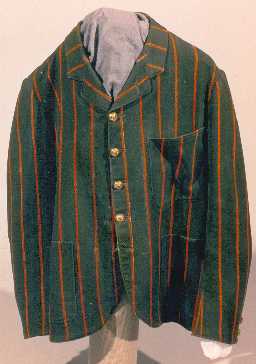