Cricket Score Book, 68th Light Infantry. On 27 March 1855, the 68th Light Infantry's 'Leg of Mutton' Cricket Club played at the 4th Division's camp outside Sebastopol. This was the first game of cricket played in the Crimea by the 68th LI. A few weeks later, on 7 June, Lieutenant James Marshall was killed by a shell splinter during a night attack on the Russian trenches. He was 19 years old. Acc No: 4012/3 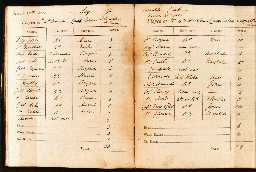