A set of Colours was presented to the 68th Regiment in 1776 or 1777 in Dublin. Though called the 'Peninsular War' Colours they were not taken to the Peninsula but were left at the Regimental Depot at Lewes in Sussex. The Colours did, however, go with the Regiment to Canada in 1818. When new Colours were presented to the 68th LI in Quebec in September 1825, these old Colours were lost and did not reappear until 1910. The remains of these two Colours were finally laid-up in the Regimental Chapel in Durham Cathedral in 1923. In 1981 all the DLI's Colours in the Cathedral were taken down and photographed. The King's Colour had almost rotted away but the Regimental Colour (shown here) has survived in better condition. This Regimental Colour, which was once dark green silk, has faded to a muddy brown. In the centre is 'DURHAM' in gold wire on a scarlet circle, with '68 REGT' on green inside. The individual battle honours, which were added in 1823, are in yellow wool on blue silk whilst the honour 'Peninsular', added in 1815, is in gold wire. 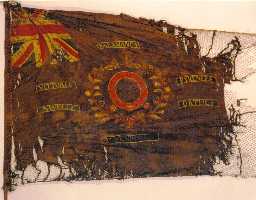