Lambton Cap, 68th Regiment of Foot, 1770-1775. A new type of soldier was added to British Infantry Regiments in 1770 - light infantrymen. These soldiers were specially chosen for their skill and intelligence and were trained to scout and skirmish in front of the Regiment. To show they were different, these light infantrymen were given new weapons and uniforms, including a leather cap. The cap in the DLI Museum is extremely rare and it is the oldest known, surviving item of uniform worn by the 68th Regiment - the ancestor of The Durham Light Infantry. It is made from leather with an upturned leather peak and a brass plate or badge. The body of the cap was once coated with black shellac and the comb was once maroon. The plate is made from thin brass and has the letters 'JL' and a ram's head in recognition of Colonel John Lambton, who raised the 68th in 1758. The special motto 'Faithful' was granted to the Regiment in the West Indies in 1772-3. Acc No: 1443 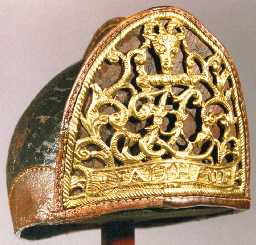