A set of Colours was presented to the 1st Battalion DLI in June 1888 at Colchester by the Duke of Cambridge. They were finally laid-up in Durham Cathedral in October 1912. In 1981 all the DLI's Colours in the Cathedral were taken down and photographed. This is the 1st Battalion DLI's Regimental Colour. Today it is in poor condition but once was a red cross of St George on a white background with a central badge in crimson with the Roman numeral 'I' in gold wire and the name of the Regiment around. The combined battle honours of the 1st and 2nd Battalion DLI are in yellow scrolls. The battle honours for the South African War have not been added. 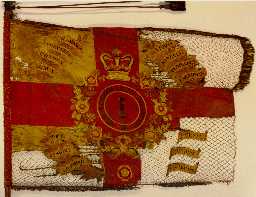