A set of Colours was presented to the 106th Bombay Light Infantry in August 1874 at Parkhurst on the Isle of Wight by the Princess Royal (the mother of the German Kaiser William II - 'Kaiser Bill'). In 1881, the 106th LI became the 2nd Battalion DLI and these Colours were taken on campaign in Egypt in 1885-86. They were finally laid-up in Durham Cathedral in October 1912. In 1981 all the DLI's Colours in the Cathedral were taken down and photographed. This is the 106th Battalion's Regimental Colour. Today it is in poor condition but once was a red cross of St George on a white background with a central badge in crimson with the Roman numeral 'CVI' in gold wire. The single battle honour 'Persia' remains on a yellow scroll. 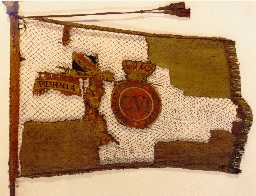