Bass Drum, 68th Light Infantry, about 1870. This drum was made by George Potter and has a wooden shell with the skin heads tensioned with whitened ropes. It is painted with the Royal Crest, the Regiment's Battle Honours and the Roman numerals 'LXVIII' (68). This is only known surviving drum of 68th Light Infantry. After the 68th LI became the 1st Battalion DLI in 1881, this drum was cut in half for displaying on a wall, probaly in the Officers' Mess. Acc No: 173 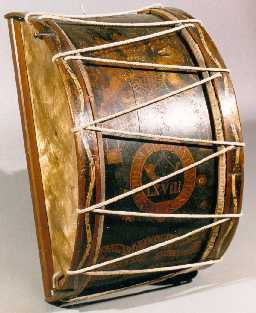